A selection of RNZ's coverage of the long-running Auckland music festival, which ran most summers between 1994 and 2014.

A selection of Radio New Zealand's coverage of and around the long-running Auckland music festival, which started in 1994 with only a couple of years off.

This was the first Big Day Out to be held at Western Springs in Auckland.

As well as the audio programmes below, Music 101 producers Sam Wicks and Nick Atkinson, and The Wireless contributor Joe Nunweek live blogged on The Wireless on the day.

The Wireless also has articles about coming of age with the Big Day Out both as a punter, and as a musician, how to make the most of attending the festival, and a written review of the 2014 Big Day Out. 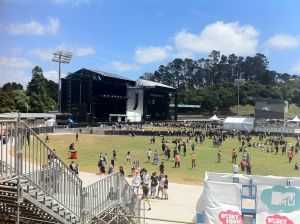