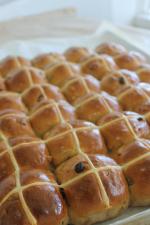 Place the milk in a saucepan and heat until lukewarm. Add in the sugar and stir until it is dissolved. Take the mixture off the heat and pour the milk and sugar mixture over the yeast. Stir to dissolve.

Put the dries – flour, mixed spice, cinnamon, cloves and salt into a bowl and stir to combine. Add in the milk mixture, egg and butter and knead for approximately ten minutes.

Add the fruit to the dough and knead through until combined evenly throughout the dough.

Leave to prove for 30-40 minutes until the dough doubles in size. The time required for this will depend on the weather, so make sure you leave enough time for the dough to rise.

Tip the dough onto a floured bench and roll out to 4 cm thick. Using a knife, cut into squares, approximately 4cm cubes. This should equate to roughly 150g per square.

Place the squares on a lined tray and let prove until double in size. This will take around 40 minutes.

Make the cross by mixing 1/2 cup flour and 1/2 cup water to make a paste, pour into a piping bag and pipe a cross over the buns.

Preheat the oven to 200°C then turn down to 180°C and place in the buns. Bake until brown. Approximately 20 minutes.

When ready remove from the oven and paint a glaze over the buns. To make the glaze simply combine sugar and water until the sugar is dissolved.