Before 'Monty Python's Flying Circus' and 'Goodies', there was 'The Cambridge Circus'. Hear the tapes recorded when John Cleese, Graham Chapman, Bill Oddie and Tim Brooke-Taylor toured New Zealand together as young comedians fresh from university.

Before Monty Python's Flying Circus and Goodies, there was the Cambridge Circus. 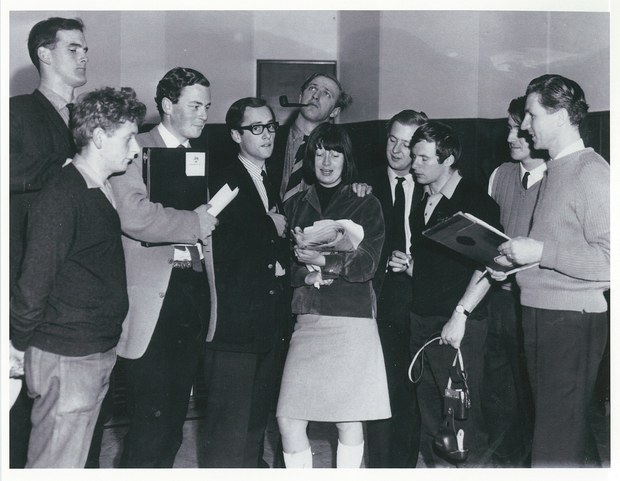 Back in 1964, a capping revue from Cambridge University called Cambridge Circus toured New Zealand for a theatre chain. During the tour, the New Zealand Broadcasting Corporation (NZBC) recorded five shows with its cast - four half-hour radio shows and a television special.

The performers were on nobody's radar; just a pack of clever university minds purveying the humour of the time. In fact, the Cambridge Circus recordings were initially intended to be wiped, so the recording tapes could be reused.

But they weren’t wiped, which is fortunate.

A decade or so later, Cambridge Circus's piano player joined the band Jethro Tull. One of the comedians became the head of ITV Comedy and another became the head of BBC Radio. Jo Kendall spoke the very first line in Emmerdale. Jonathan Lynn wrote Yes, Minister. Bill Oddie and Tim Brooke-Taylor became Goodies.

After reading about the shows in a book about the Pythons, radio producer Steve Danby managed to track down the recordings at Nga Taonga Sound & Vision.

Peter Downes recorded sessions for the NZBC, and it is entirely thanks to him that the RNZ tapes of Cambridge Circus survived.

From the archives, here are the four radio shows the now-legendary comedians recorded:

John Cleese brings a woolly mammoth through customs and Bill Oddie wins the Asiavision Song Contest. Tim Brooke-Taylor and David Hatch demonstrate exactly how Oliver Cromwell executed all the Elizabethan stand-up comics. And – HORRORS - the whole cast takes the mickey out of lovely nostalgic documentaries about the “good old days”.

Graham Chapman is a cop “on the beat”. David Hatch gets a root canal. John Cleese has apparently been watching a TV programme about the Norwegian Blue. And Bill Oddie sings the dumbest country and western song ever written.

Tim Brooke-Taylor books a holiday from hell. It seems Bill Oddie is turning into a bird. Jo Kendall and John Cleese get steamy in Malaya. And a team of TV cricket commentators are completely stumped.

The opening theme to this series is the famous circus march “The Entry of the Gladiators”, written by Julius “Flying” Fucik. Our version comes from an archival recording of the 1981 New Zealand National Youth Band, and the Brass Band Association of New Zealand very kindly let us use it.

As an outside contractor to RNZ, I would like to thank the numerous people on staff who helped bring these shows back to the airwaves. My particular thanks to the mystery voices who delivered the readings.