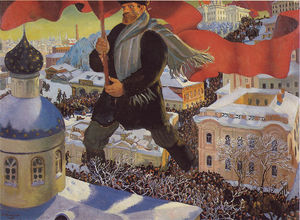 Despite his personal anguish at what had happened in and to Russia since the 1917 Revolution, it was not that difficult a task for the composer to plainly express in music the emotions surrounding what actually took place at the time. Shostakovich was after all one of the greatest film music composers of the 20th century, and he simply used his film scoring techniques to brilliantly conjure the atmosphere and events of 1917.